← more from
Beyond Beyond is Beyond Records
Get fresh music recommendations delivered to your inbox every Friday.

All My Friends Are Stone [Distro] 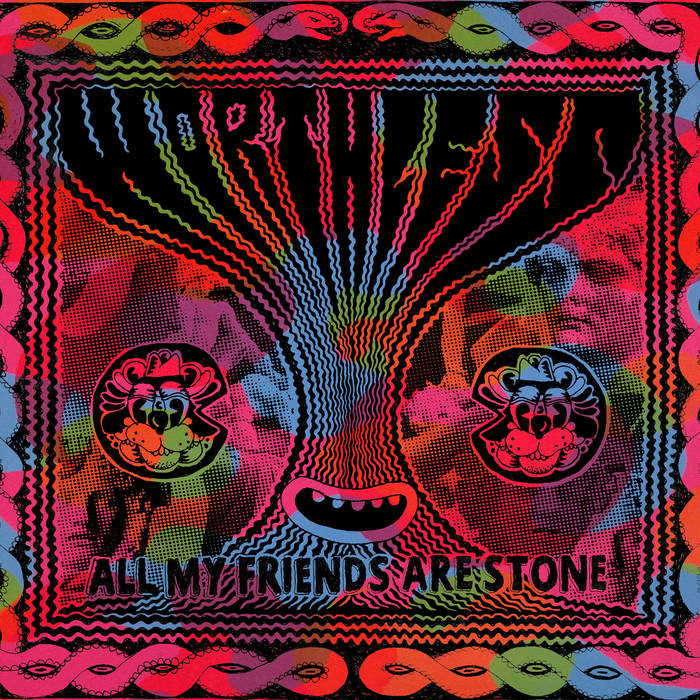 There are perhaps few bands in existence with a moniker that carries as much of a misnomer as does Worthless, a band whose every release chips away at the validity of their name. With the appearance of their full-length album entitled “All My Friends Are Stone,” the band again proves themselves to be indescribably valuable to ears that appreciate high-weirdness, of the often highly-amplified variety – and by extension, sounding more Worthless than ever before.

“All My Friends Are Stone” is a one hundred percent certified freak-show of an album, a merry-go-round of sonic bemusement and candy-cane confusion, both uninterested in and unwilling to allow its sound to linger in one place for very long. And yet, despite its homegrown Gypsy wanderings, the songs on “All My Friends Are Stone” taken together offer an undeniable and undeniably cohesive chain of charm.

That Worthless charm is present from the first song, the warped wake-and-bake wallow of “Pizza Break.” It’s immediately clear that on “All My Friends Are Stone,” Worthless have declared themselves to be constrained by nothing, save for their own imagination – tempos drift, vocals shoot from heavenward to hell-bound and back again, and the picture emerges of a sonic landscape that Syd Barrett might declare super fucking strange. “Dee Minnor” follows, flute and clean-guitar leading the procession towards an impossibly catchy refrain, answering the unasked musical question of what it might sound like for Spacemen 3 to have jammed with The Association – with a result certain to be cherished by all freaky friends, stone and non-stone alike.

The seventeen-minute-plus B-side of the album, “Yellowfingers,” is unquestionably the album’s centerpiece, the far-out fruition of the Worthless sound writ large. Simply put, it’s one of the best-sounding, memorable and simply very, very good “bad trips” that any listener is ever likely to take.

“All My Friends Are Stone” is certain to gain Worthless an expanding universe of friendships, connections sturdily built upon the band’s post-planetary psychic-bliss. Welcome to their world, where love is also hate, where pain morphs into pleasure and the click of a fuzz pedal, and where being Worthless is absolutely priceless.
• revoltoftheapes.com